Are you considering divorcing your spouse, or have you been served with divorce papers in Virginia?

Arabs and/or Muslim-American couples face unique cultural and legal challenges when separating or divorcing. That’s why it is crucial to hire an attorney who understands both the complexities of Arabic culture, divorce, and the legal requirements in the Commonwealth of Virginia. Attorney Tania Klam of Roop Xanttopoulos Babounakis & Klam PLLC has extensive experience helping Arab clients with divorce in Virginia. Ms. Klam is half Lebanese and half Syrian and as a native speaker, she speaks numerous dialects of Arabic fluently. She is a member of the Arab American Bar Association, the National Arab American Bar Association, and is a top Arabic speaking family law lawyer.

Attorney Klam has a firm grasp on the cultural challenges involved in Muslim divorces as well as divorces amongst Arabs and middle eastern individuals and has the skills to protect your parenting and property rights as you navigate the divorce process. She can help you understand the binding effect of promises made at Islamic wedding ceremonies, Islamic law, Arab culture, and the impact that Commonwealth laws (such as equitable distribution) could have on your divorce.

If you are an Arab, Arabic speaking, and/or Muslim-American seeking separation or divorce from your spouse in Virginia, contact Attorney Tania Klam of Roop Xanttopoulos Babounakis & Klam PLLC for a consultation today.

Special Considerations for Arabs and Divorces

When Arabs and/or individuals who practice the Islamic faith, are seeking a divorce, there are special considerations that must be taken into account such as cultural traditions that some individuals may want to adhere to. Those who have entered into an Islamic marriage may have a claim to promises made in religious ceremonies or cultural promises they depended on. Some unique challenges that can arise during the divorce process include:

In Islamic culture, a husband can simply tell his wife, “I divorce you,” and the marriage is dissolved. But in Virginia, husbands cannot merely state that it’s over and expect to be legally divorced. In Virginia, marriage is a secular institution, and all couples, regardless of religious beliefs, must go through the courts to obtain a valid, lawful divorce.

If your husband ended the marriage under Islamic traditions, but not under U.S. law, you still have specific property rights, and our attorneys can help you safeguard those rights.

For most Islamic marriages, Husbands establish a financial obligation to their wives upon entering the marriage, known as Mahr, sadaq, nahlah, ajr, and faridah. Mahr, is an Arabic word meaning dowry. Mahr is a benefit given or promised by a man to a woman when they marry. It is essentially the husband’s promise that he will pay a certain amount of money or property either during the marriage contract or after its conclusion. The Mahr does not have to be mentioned in the Nikkah for the Nikkah to

be valid, but it must be paid regardless. Mahr is the Husband’s obligation that is specified in the Qur’an, the Sunnah and ima’.

In most cases, the Mahr is written on the marriage certificate during a traditional marriage and the certificate is signed by an Imam. This is viewed in the United States as a legally binding contract. If the husband refuses to pay, the traditional Islamic and/or Muslim marriage contract can be used to force the husband to offer up the promised amount.

In some cases, Mahr is paid upfront. In other cases, some of it is paid upfront, while the rest can be paid through other means. Unpaid Mahr could be recovered from property, 401k accounts, revenue from the sale of other assets, etc.

Even if your rights are limited by Sharia law, you are legally entitled to protection under U.S. law. Our team will fight on your behalf to enforce your legal rights in the Commonwealth. Even if certain assets are in your husband’s sole name, such as your house and cars, you are entitled to a portion of the marital property under Virginia law, and we can help you retain your fair share. Virginia courts use an “equitable distribution” model to divide property between divorcing spouses. This means that courts must divide marital property between the two parties in a fair and just way.

We understand Islamic and/or middle eastern culture and the desire to respect long-standing religious traditions. We also understand that many Arabs, middle-easterns, and/or Muslims feel ashamed when pursuing divorces as they may be viewed as unacceptable in the culture. They are concerned about bringing shame on their families or being shamed by others in their communities. If you have these concerns, we could also help you pursue alternatives to divorce, such as a complaint for “separate maintenance.” Through separate maintenance, you can get the support you need without going through a formal divorce. You could even obtain custody or visitation rights and retain marital property without officially divorcing.

For those about to be married, Attorney Tania Klam could help draft a suitable prenuptial agreement that protects your assets should the marriage end in divorce. If your soon-to-be spouse presents you with a prenuptial agreement, Tania Klam can offer you knowledgeable advice, inform you of your legal rights, and help you determine whether you are getting a fair deal or not.

It is impossible to make informed decisions regarding your marriage or divorce unless you understand all of your legal rights. That is why we highly recommend speaking to our firm before you sign anything, whether it be a prenuptial agreement, post-nuptial agreement, or settlement agreement. Our team will review the document to ensure your rights are protected.

How a Virginia Arab Divorce Attorney Can Help

Consulting with an attorney who understands the Arab culture, middle eastern traditions, and/or the different religions and faiths in the middle east, prenuptial agreements, Mahr (dowries), and the logistics of separating or divorcing in Virginia is of paramount importance for middle eastern and/or Arab/Arabic couples seeking a divorce. Contact Roop Xanttopoulos Babounakis & Klam PLLC today to schedule a consultation with our native Arabic speaking Attorney Tania Klam. 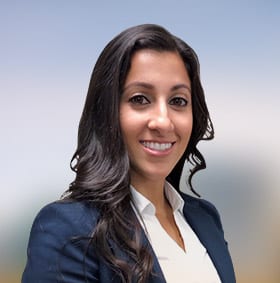 August is National Child Support Awareness Month, and a good reminder to reflect on any…